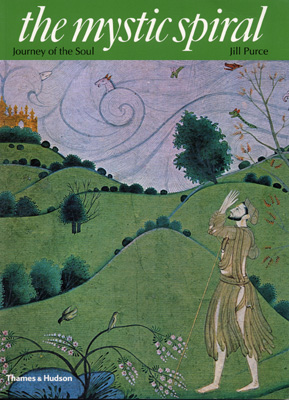 The spiral is a natural form of growth, and has become, in every culture and every age, humanity's symbol of the progress of the soul towards eternal life. As the inward winding labyrinth, it constitutes the hero's journey to the still centre where the secret of life is found. As the spherical vortex, spiralling through its own centre, it combines the inward and outward directions of movement.

In this original and engrossing book, Jill Purce traces the significance of one of our central symbols from the double spirals of the Chinese Yin Yang symbol to the whorls of Celtic crosses, Maori tattoos and the Islamic arabesque. Many of the superb images here were intended as objects of contemplation; for the spiral is a cosmic symbol.

The Bishop of California talks about Jill's roll in inspiring the installation of labyrinths in his Cathedral – Grace Cathedral in San Francisco – during the 1990’s.

"Jill," he says, "helped inspire Lauren Artress, the person who birthed the modern labyrinth movement. Jill's groundbreaking work with the labyrinth was inspiring and informative to Lauren, and important... it couldn't have been done without Jill's work."
- Marc Andrus, Episcopal Bishop of California


Listen to the Bishop

"The spherical vortex, spiralling through its own centre is perpetually turning in on itself, expanding and contracting, and has an interchangeable centre and circumference, it combines the inward and outward direction of movement and has neither beginning or end- it is the stable form of flow created in water and air."
Jill Purce The Mystic Spiral

"I can remember Robartes saying, in one of his paradoxical figurative moods, that he pictured reality as a great egg laid by the Phoenix, and that this egg turns inside out perpetually without breaking its shell"
W.B. Yeats A Vision (quoted in The Mystic Spiral)

"The nature of infinity is this: That everything has its Own vortex, and when once a traveller thro' Eternity Has pass'd that Vortex, he perceives it roll backward behind His path, into a globe itself unfolding like a sun... Thus is the heaven a vortex pass'd already, and the earth A vortex not yet pass'd by the traveller thro' Eternity"
William Blake Milton (quoted in The Mystic Spiral)

"The "Mystic Spiral" is the clearest expression I have ever come across of the system I have glimpsed in the intuitive flashes my poems are composed of. The bones of the universe, one potent sunbird structure. Ms. Purce is the magic maiden with the skeleton key that opens a myriad of doors."
George Andrews Poet and author

"Jill Purce's book is extraordinary, it shows the spiral going through all the manifestations of life- art, music, literature, dance, religion, mythology, physics, biology, botany and astronomy. Everything is spiral. She points to the unity of the cosmos, and acts as a counterbalance to the atomization of the world. There are hundreds of wonderful illustrations. She gives you the key like the thread of Ariadne which leads you out of the labyrinth."
Karlheinz Stockhausen

"I deeply appreciate, this marvellous book, The Mystic Spiral. It seems to me that this book- and indeed the whole series "Art and Imagination" of which Jill Purce is the General Editor - heralds the consolidation of a new philosophy of life in which art takes its place as an essential guide to, and expression of, our development -if the world is to continue to live."
Peter Redgrove author of Wise Wound

Mere words can not do justice to the beauty of this book. Elegant, graceful, profound, these spirals embody such concepts as eternity, evolution, birth and death, expansion and contraction, the Tao, and God."
Stanley Krippner Association for Humanistic Psychology Newsletter

"The Mystic spiral, together with its spiritual message, has much to tell us architects of the laws of growth and its archetypal forms. This would help us design buildings which are within the flow of nature rather than in opposition to it."
Professor of Architecture Birmingham School of Architecture

"Jill Purce"s The Mystic Spiral is thoughts I have thought and is the most thought-furthering / interesting work I have read for a very long time."
Dean Melles Hacks, Singapore

"I found the Mystic Spiral one of the most absorbingly fascinating books I have ever laid hands on."
Lionel Miskin Professor of Art, Falmouth School of Art

"Her book, The Mystic Spiral and the BBC film of the same have enlisted not so much my imagination as my heart. I count myself a genuine admirer of her work. Jill Purce is an alchemist, the first I have noticed in this age."
Sebastian Barker author of Guarding the Border

"It is bridging the gap, the irreconcilable chasm between Science and Religion- "reason" and "feeling" which Ms. Purce has dexterously pursued by way of The Mystic Spiral. The spiral is both a universal mythological symbol as well as an empirical picture of the most fundamental ordering of matter and energy. "In The Mystic Spiral Jill Purce has excelled in the dovetailing together of rational and mythological language and ideas, and by so doing she illustrates how the spiral is an archetypal symbol which reverberates, unaltered, between the extremes of empirical science and spiritual growth. Her juxtaposition of images as well as her well-chosen words unite the disparate threads of our experience into a single, self-perpetuating, spiral expression."
Dr Lawrence Blair author of Rhythms of Vision