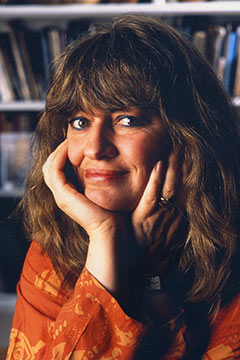 Jill Purce believes we are a nation out of tune with our souls - and that we must chant our way back to spiritual wellbeing. Alan Franks met her.

It may be an uncharitable thing to say at this time of year, but we are not much good with our voices. Most of us can barely hold the tunes at the carol service, let alone have a go at the harmonies.

Community singing, once lustily practised in football grounds throughout the country, has become inhibited with the spread of the all-seater stadium. And when we do raise our voices to sing, the chances are it will be a karaoke effort, in which the whole idea is to emulate someone else. We sound like a nation that has lost its voice.A growing school of thought argues that our way back to vocal competence is through the timeless techniques of chanting. It is less socially inhibiting than singing since the emphasis is less on 'right' and 'wrong' notes than on individual pitch. The theory is that you are more likely to resonate to your own best ability when you are surrounded by the security of others doing the same. It is a wisdom that is attracting a broad range of people, from professional singers in search of invigoration to those who are paralysed by fear at the thought of opening their mouth.

I recently attended a weekend chanting course in London, to see who are trying to find their voices, and why.From outside the door, the result sounds like the drone of an enormous bagpipe. It is continuous, unbroken, unbreathing, the product of some infinite lung. It is also hypnotic. I have never heard anything like it from close quarters.Inside, the phenomenon grows even stranger. The sound is not so much produced as inhabited by a group of about 40 people sitting in a circle on the floor. There is every conceivable type here, from the young accountant in startlingly new jeans to the long-retired teacher who was a hippy before the term was invented. All they share is their mutual disparity. That, and this indescribable communal hum.Further inside, sitting in the heart of the sound, you start to hear still weirder things. Other-worldly arpeggios are coming from somewhere. They are as high as the ear can hold, have an angelic clarity and move in sonic flocks above the grounded drone. I have tried to explain these distillations to other people - and I will try again here - but that is rather like rationalizing a miracle. All I know is that it does happen.

This is overtone chanting of the kind practised immemorially in Tibet and Mongolia. Such a description may make it sound arcane and exotic, but is in reality a natural and accessible pursuit.Chanting of all kinds is enjoying great popularity in the western world. A few years ago an album of Gregorian chanting by a Benedictine order of Spanish monks entered the Top Ten, and also reached the number one spot in the classical charts. At rock clubs in America there are now places set aside for the audience to chant their way back to aural calm after the assaults of the band.Several of the participants in this room are visibly moved: none more so than the woman in her seventies who has been told from childhood that since she makes no sound worth hearing when she opens her mouth, the best thing is to keep it shut. And so it has been for a lifetime, a voice put on silence and in detention. When she now hears the flock of arpeggios, looks to see where it flies from and senses that this place is none other than her own throat and head, she can be forgiven for being overwhelmed.

This intense two-day Inner Sound and Voice Workshop is being led by Jill Purce, a London musician and writer at the forefront of the field. In the sense that she is as calm as you would expect, she could be called modest; her vocational agenda is as immodest as they come. It is to re-enchant the whole world.She uses the word in its original sense. She wants to make it chant, sing, use its voice, in the firm belief that the other sense, of delighting or bewitching, will follow. She is now 25 years into the task. During this time she has taught and lectured all over the world, and her following is growing steadily. To chant, she argues passionately, is hardly a new and eccentric proposition. It is as old as humanity, and fundamental to our wellbeing both as individuals and societies. Liberate the voice and you liberate its owner. To keep people "in tune" is to keep them healthy.There is elegy and urgency in her pleading. "The time is virtually gone when we sang together", she says. "The proportion of the population who go and sing in church is tiny. We do not gather to sing secular songs in our homes, as fairly recent generations did. The idea of the worksong has gone from view, for obvious reasons. Our noises are the noises of mechanisation".Purce aims her workshops at people who have always wanted to use their voice, but who have felt that, for whatever reason, physical or emotional, their expression is blocked.

In the early Seventies she spent some years in Germany working with the avant-garde composer Karlheinz Stockhausen, and shared his fascination with the relationship between sound and the form of physical matter. She has also studied in the Himalayas at the Gyutš Tibetan monastery and Tantric College, learning forms of Mongolian and Tibetan chanting.For the timid or the wary, a central aspect of the Purce workshops is that no one is called upon to sing, chant or otherwise give an account of himself solo. As a result, one of the lifelong barriers to vocal expression - the fear of being alone and judged - is removed at a stroke, and every person can sense what his own voice is doing, without feeling exposed.

When I attended this two-day introductory course, I did so largely out of curiosity about the overtone chanting, of which I had heard such astonishing reports. There were many others who, although intrigued, wanted only to see whether they had a voice. It was as though they had an attic full of furniture which had lain under dust-sheets for years and which they were only now inspecting.I spent the whole of the Saturday, and most of the Sunday morning, resigned to the idea that I would never learn the rudiments of overtone chanting. And the harder I tried, the further it seemed to recede. Then, just before midday, it happened. From out of the general hum of 40 people chanting together, I could hear a new and distinctive noise, as though my very head was chiming out pure lengths of sound that rose into the air like curling smoke. I was there. I was producing two notes, the greater and lesser, the lower and the higher, at the same time.I can only compare the exhilaration, and slight shock, with the notion of some experience that I have never had: say, discovering a new limb or sense, finding a bowling green in the bathroom, or being given instant familiarity with a foreign language.

These overtones are not figments of the imagination. They are the tiny constituent parts of a given note, just as bricks are the tiny constituent parts of a house. By manipulating the tongue and mouth in a particular way, you can make the component sounds audible.Historically, this manner of chanting has played an enormous part in the meditative techniques of Tibetan and Mongolian Buddhists, and after even 30 minutes of fumbling and inexpert ummmming and ahhhhhing, it is hard not to feel that you have tapped yourself into an awesome and timeless source of wellbeing. Bearing in mind that most people who came to this room did so because all they wanted was a little more confidence about their own voice, it is easy to see why there is an air of disbelief twined through the silence which eventually settles on the room at the end of the second day. I carried my new limb, my new sense, my new foreign language out into the evening. Between the college and Marylebone Road I showed it off to the sky for all I was worth. I took it with me into Baker Street station and got some funny looks on the Tube. Since then I haven't looked back. I do it at home, in the quiet of the late evening, I do it in cars, against the noise of the engine, I do it with friends, I do it on trains. I get funny looks from one end of the Network SouthEast to the other, but I have not the slightest intention of stopping.